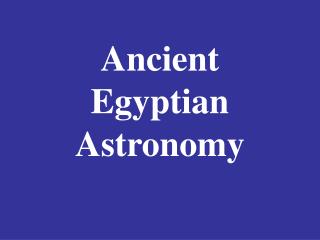 Ancient Egyptian Mythology - . by lauren clark 4 th grade. facts. some ancient egyptians believed they were made of

Ancient Egyptian Art - . by ian isom. april 2012. what can you tell me about this mask?. objectives. identify the three

ANCIENT ASTRONOMY - . what is astronomy?. astronomy is the science of the stars, planets and other celestial bodies as

Ancient Egyptian hieroglyphics - . used on temples they are written left to right. known as pictographs there are more

Ancient Egyptian food - . by deepika. contents. what food did farmers plant? what egyptians eat? what fruits did

Ancient Egyptian Pharaohs - . pharaoh ramses ii . one of egypt’s most famous pharaohs. he was very well known for