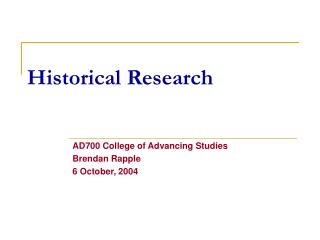 Historical Research AD700 College of Advancing Studies Brendan Rapple 6 October, 2004 History is a Representation of the Past But representations may be hindered by lack of ability of historian lack of evidence historian’s biases historian’s interpretation

Historical Research - . what is historical research?. the systematic collection and evaluation of data to describe,

Historical Research - . top 10 list. number 10. you can use many of the library databases, electronic journals,

HISTORICAL RESEARCH METHOD - . what is history? e.h. carr: an unending dialogue between the present and the past, a

Historical use of research animals - Office for the responsible conduct of research use of live, vertebrate animal