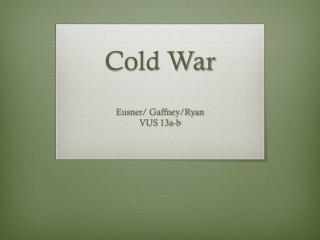 Cold War. Eusner / Gaffney/Ryan VUS 13a -b. What were the political, economic, and social consequences of World War II? . 13a. Postwar outcomes The end of World War II found Soviet forces occupying most of Eastern and Central Europe and the eastern portion of Germany.