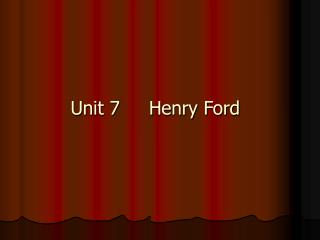 Unit 7 Henry Ford. Unit Overview. In this unit you will :  Read about Henry Ford, the father of Ford cars Learn how to guess meanings of words from context Take a test in fast reading Read about Thomas Edison, the inventor Know something about a great woman scientist.