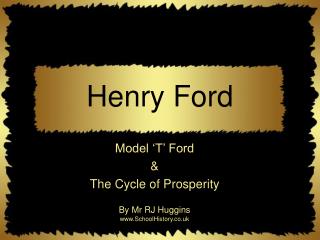 Henry Ford Model ‘T’ Ford & The Cycle of Prosperity By Mr RJ Huggins www.SchoolHistory.co.uk The Model ‘T’ Ford Henry Ford set out to build a car which everyone could afford to buy. It was slow, ugly and difficult to drive, and was nick named the ‘Tin Lizzie’ by the American people.