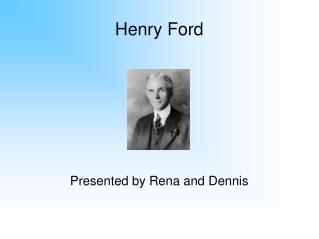 Henry Ford. Presented by Rena and Dennis. Structure. General facts His concerns The Dearborn Independent (DI) ‏ Bonds to the NS Henry Ford in BNW. General facts . * 30 July 1863, Michigan † 7 April 1947, Michigan 1875: he had his own studio 1878: he built his first combustion motor