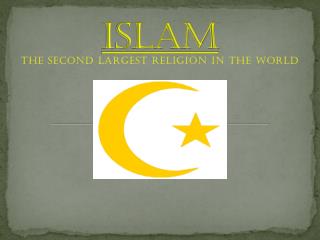 Islam - . part four of the world religions series sponsored by the a-b tech diversity committee. history. the founder and

Islam - . outcome: islam today. islam in the world today…. islam today.  a statistical look today there are over 1.2

Islam - . background hejira 5 pillars. muhammad ali. muhammad ali was born in mecca in 570 a.d. he was raised by an uncle

Islam - . history . islam means submission (to god) in arabic. a person who follows islam is called a muslim which means

Islam - . islam. islam submission to god followers are muslim one who submits to god 2 nd largest religion in world 2.2

Islam - . communication. 90 % of the world’s muslim do not speak arabic as their native