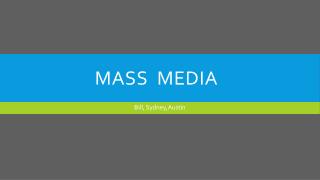 Mass media. Bill, Sydney,Austin. What is mass media?. Mass media consists of the various means by which information reaches large numbers of people, such as television, radio, movies, newspapers, and the Internet. Who uses mass media?.

The Mass Media - . what is the mass media? the vast array of sources of information that are available to the public.