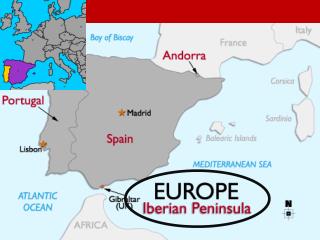 Spain. Where is Spain located?. Spain is located on the Iberian Peninsula. It is in the southwest of Europe. Spain takes up about 85% of Iberia . Gibraltar is a waterway that separates Spain from Africa. History of Spain. In the early years, Spain was ruled over by the Roman Empire. Doing Business in Spain - . toronto, 20 th may 2008. invest in spain: economy, business and advantages for canadian

Sports in Spain - . by: jackson enrichment 5 th grade. sports in spain. sports are an important part of spain. they play

Spain and Portugal - Spain was part of the roman empire until it fell, after that the moors (muslim) controlled spain

Spain - . by morgan ogilvie. history. in 218 bc. the roman empire had control of the area of what is now called spain.

Spain - . by: annabeth clark. location. spain is a country located in south western europe on the iberian peninsula. the