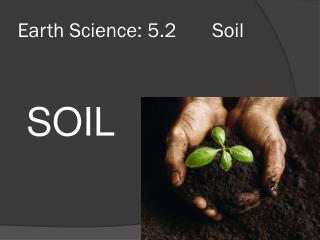 Earth Science: 5.2 Soil. SOIL. Key Concepts for Today . . . . Today students will learn and identify What are the major components of soil What are the most important factors in soil formation How soil varies with depth The three common types of soil Chapter Five - . weathering, soil, and mass movements. weathering. weathering is a basic part of the rock cycle and a key

Soil Horizons - . by: michelle k jimenez. what is a soil horizon?!?. different layers of soil. there are five soil

Our Learning Garden - Grade 9 Sacred Soil and Wheatgrass - . lesson summary- this unit connects students to soil as they