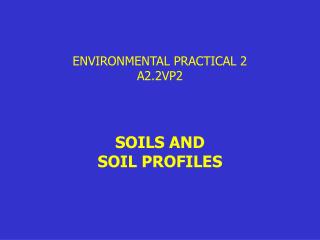 ENVIRONMENTAL PRACTICAL 2 A2.2VP2. SOILS AND SOIL PROFILES. Soils and Soil Profiles. What is a soil? Factors influencing the nature of a soil Weathering and soil development Soil formation Soil profile description Soil classification systems. What is a Soil?. A2.2NP1 Environmental Practical 1 - . topic 2 the global positioning system. acknowledgement. this lecture has been

Lab Practical #2 - . starfish, shark and turtle. 1. what is the name of this structure? a. central disk b. madreporite c.

Practical Session 2 - . a flag is a single bit of information whose meaning is independent from any other bit. flags

Practical Session 2 - . a flag is a single bit of information whose meaning is independent from any other bit.

Practical Writing (2) - . practical writing. notes and letters are very common means in passing your message to other

A Closer Look and Water and Soil Degradation - . soil erosion facts. soil is a “potentially renewable resource” – a

AIM: What is SOIL and how does it form? - . soil: a combination of weathered bedrock and organic material. bedrock: solid