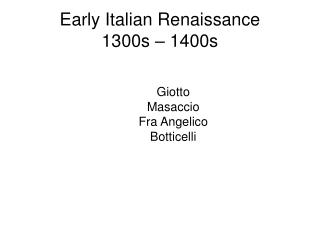 Giotto Masaccio Fra Angelico Botticelli. Early Italian Renaissance 1300s – 1400s. Renaissance means “rebirth.” The term refers to the period in which Europe emerged from the Middle Ages and began to value the aesthetic traditions of classical Greek and Roman culture. Unit 3 and 4 Questions - . global 9 review myers. which factor contributed to the beginning of the renaissance in italian

The Art of the Italian Renaissance - . renaissance. means “rebirth,” specifically the revival of art and learning

Authors in World History - . who wrote the koran?. muhammad the prophet. what religion did muhammad found?. islam. name

The Renaissance - . chapter 15 section 1: the italian renaissance. the renaissance. society and politics . after viking