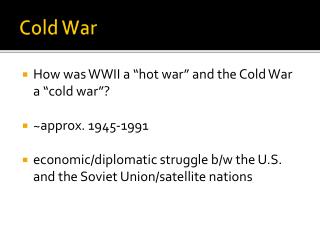 Cold War. How was WWII a “hot war” and the Cold War a “cold war”? ~approx. 1945-1991 economic/diplomatic struggle b/w the U.S. and the Soviet Union/satellite nations. USSR expands and closes off.