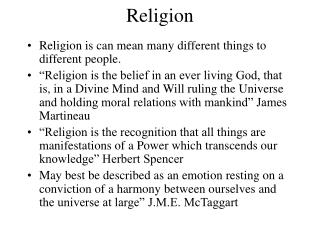 Religion. Religion is can mean many different things to different people. “Religion is the belief in an ever living God, that is, in a Divine Mind and Will ruling the Universe and holding moral relations with mankind” James Martineau

Difference Between Deen and Religion and its impacts on human life - . in the name of allah, the most gracious, the most

What do you know about Religion? - . religion. hey guys!! my name is chastity . i am here to talk you today about a

TaK - Religion - . tak - religion. some questions to start …. why are there religion(s)? how do we assess the claims of

Religion - . what is religion?. religion is a unified system of beliefs, rituals, and practices that typically involve a