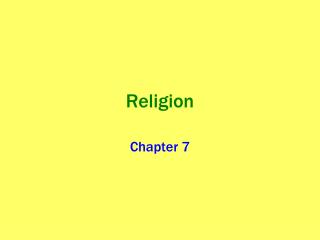 Religion. Chapter 7. Key Question:. What is Religion and What Role does it Play in Culture?. Government Impact on Religion. The Soviet Union: Had an official policy of atheism Discouraged religious practice Drew boundaries for political control that separated ethnic groups in small areas.