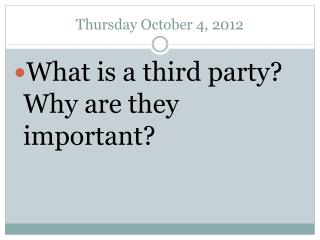 Thursday October 4, 2012. What is a third party? Why are they important?. CE 5c: Analyzing campaigns for public office with emphasis on the role of the media. . What do we see/hear?. Speeches Mailers (pamphlets, post cards) Thursday , October 4 th - . get out your “winter dreams” character chart and a scrap piece of paper. put your name at

Thursday, October 4 th ! - . objective: identify, explain and give examples of each plot element.

October 4, 2012 - . dlt: i can interpret text in order to design a lesson and present the information to the class. act

Good Morning! Thursday, October 18, 2012 - . you will need your clickers for the bell ringer!. daily learning target: i

Agenda for Thursday, October 4, 2018 - . we will… discuss stimulants, opiates, depressants and hallucinogens i

4 th October 2012 - Important – webinar audio. the audio for this webinar is available over voip. just select the ‘