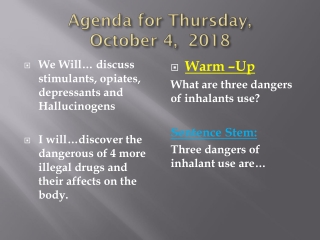 Agenda for Thursday, October 4, 2018. We Will… discuss stimulants, opiates, depressants and Hallucinogens I will…discover the dangerous of 4 more illegal drugs and their affects on the body. Warm –Up What are three dangers of inhalants use? Sentence Stem: Thursday , October 4 th - . get out your “winter dreams” character chart and a scrap piece of paper. put your name at

Thursday, October 4 th ! - . objective: identify, explain and give examples of each plot element.

Thursday October 4, 2012 - . what is a third party? why are they important?. ce 5c: analyzing campaigns for public office

AC Agenda for October 4, 2012 - . warm up: review your analysis of the prompt and be ready to share. sharing our thinking

9.30am on Thursday 18 October 2018 - . our national earthquake drill and tsunami h ī koi. background. originating in

Thursday, October 31 - . open agenda to today’s date. write quote in composition book. “i would rather sit on a