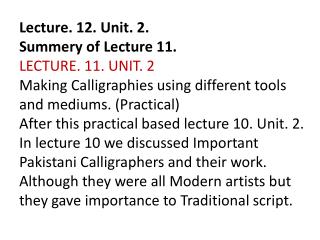 Lecture 19 - . describing people. review of lecture 18. in lecture 18, we learnt how to comprehend riddles read funny

Lecture 19 The Interstellar Medium - . the stuff between the stars. announcements. read units 49 and 61 for wednesday.

About me, you and this lecture – What do you hope to gain from this lecture? - Jeff conn’s webpage:

Summery of Lecture. 4. UNIT. 2 HISTORY AND CULTURE INDUS VALLEY ART AND CULTURE - We discussed in our previous

Lecture 21 - . chemical reaction engineering (cre) is the field that studies the rates and mechanisms of chemical