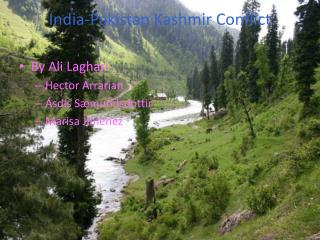 India-Pakistan and the Conflict over Kashmir

Conflict in Kashmir - . by joshua liu. map. kashmir is the northernmost region of the indian subcontinent. located on the

Conflict Over Kashmir - . what is kashmir?. geography. bordered by afghanistan, pakistan, india, and china contains

Conflict Management in Pakistan - . presented by: thomas asberg thomas.asberg@pacs.nu. what is a conflict?. conflict is

India &amp; Pakistan - . problem: in 1947 when india becomes a free country, it has around 350 million hindus

Pakistan and India - Under the scheme of partition provided by the indian independence act of 1947, kashmir ... its