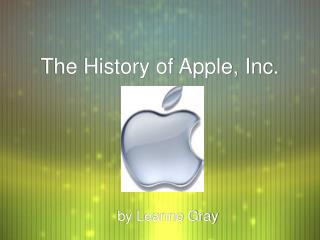 The History of Apple, Inc. The History of Apple, Inc. by Leanne Gray. Why “Apple”?. At the time, the company to beat was Atarti, and “Apple” came before them alphabetically, and also therefore in the phone book.

The History of Apple, Inc.

History of the apple business - . by: jessica randhawa. company history. the apple company started out as a group of