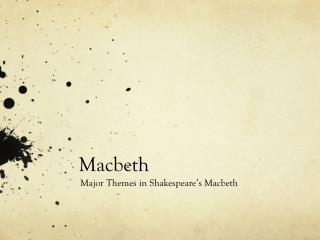 Macbeth . Major Themes in Shakespeare’s Macbeth. How To Analyze A Drama…. Here Are The Essential Elements of the Story: Theme: main idea—what the work adds up to Plot: Relationship and patterns of events Characters: people the author creates