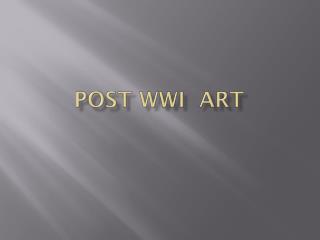 Post WWI Art. John Singer Sargent Gassed, 1918-1919. World War I was a turning point in several aspects of modern life Women asserted themselves in society Millions of deaths during WWI undermined the concept of patriotism Labor unions protected the rights of workers