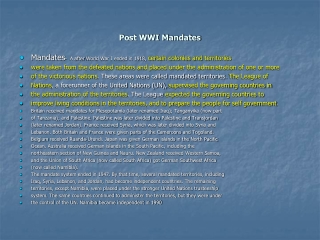 Post WWI Mandates. Mandates - A after World War I ended in 1918, certain colonies and territories were taken from the defeated nations and placed under the administration of one or more of the victorious nations . These areas were called mandated territories. The League of Mandates - . what do we have to do?. jenny erickson 2009 strategic planning 101. mandates may be…. formal requirements