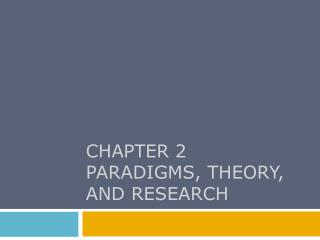 Nursing Research Paradigms &amp; Assumptions - . paradigm a worldview or general view on the complexities of the real

The Practice of Social Research - . chapter 2 – paradigms, theory, and social research earl babbie , the practice of

Chapter 1: Research and Theory - . “research on motivation and engagement is essential to understanding some of the

Paradigms of Knowing in Communication Research - . paradigms in social science provide a viewpoint or set of assumptions