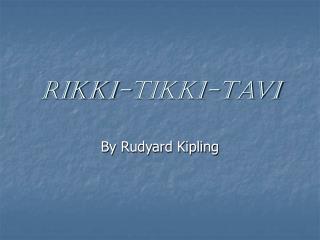 Rikki-Tikki-Tavi. By Rudyard Kipling. http://encarta.msn.com/media_461526331/Cobra.html. How the Cobra Got its Name. The king’s Latin name (Ophiophagus hannah) refers to its favorite meal— ophiophagus means snake-eater. Results from &gt;2,300 Patients in The SOURCE TAVI Registry: Changes in Patient Populations with time. - Results from

Rikki-tikki-tavi - . by: rudyard kipling. characters. rikki-tikki is a mongoose he is quick witted. nag and nagaina are

How does the setting shape the main character in “ Rikki Tikki Tavi ”? - . in this lesson you will learn how to

BCIS Autumn Meeting, Crewe, September 2008 Transcatheter Aortic Valve Intervention: How do we take it forward in the

Rikki-tikki-tavi - Setting. since segowlee cantonment was a british military base in northern india, the story must take

Rikki-Tikki-Tavi - . who is rudyard kipling?. he left india at the age of 5 and moved to england to attend school. he