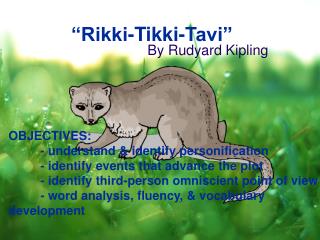 Comprehension Questions for “Rikki-tikki-tavi” - . 1. which of these characters helped rikki defeat nagaina?. a.)

Building and Implementing an Information Solution Strategy Program, and a Case Study of a Consumer Web Information - Egy.

Rikki-tikki-tavi - . by rudyard kipling. setting. since segowlee cantonment was a british military base in northern

Rikki-tikki- t avi - . by rudyard kipling. before reading: build background. title the next available page of your

Rikki-tikki-tavi - Setting. since segowlee cantonment was a british military base in northern india, the story must take