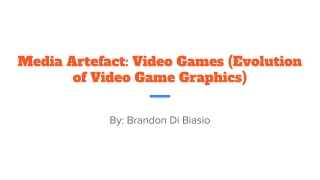 Media Artefact: Video Games (Evolution of Video Game Graphics). By: Brandon Di Biasio. First Off: The 5 W’s. Who: John Bennett came up with the initial idea to create a video game What: The video game was titled “Nimrod Computer Game” When: 1952 Where: London Why: To show at an exhibit. “Game” - Donald barthelme. “game”. how do you define “game” ?. quickwrite …. write a description of a

Necropolis Undead Platformer Your character is on a quest to acquire muscles - And skin. good practice on learning