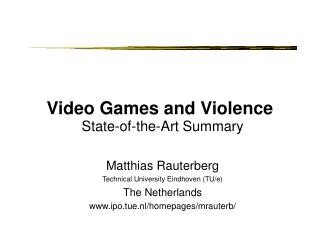 Do video games create violence in people? - . my task. we have been asked to produce a powerpoint on whether games can or

Representation of Race, Gender, and Violence in Video Games - . grand theft auto. kayla stevenson. how it is not just

Video games - . xbox, playstation, cell phone games are all around. cell phones. cell phone are pretty much a must in

Video games - . video game genres are used to categorize video games based on their gameplay interaction rather than

Video Games - . by w yatt desjardins. history on the