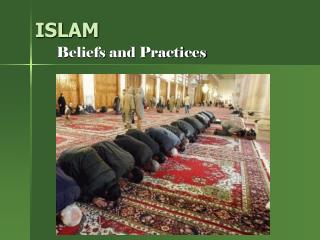 ISLAM. Beliefs and Practices. I . Components of the Faith. Islam : Means “submission to God” Muslim : A follower of Islam Qur'an : Word of God according to Muslims Hadith : Collection of the words and example of Muhammad From testimony of Muhammad’s companions. Five Pillars of Islam. The Rise of Islam - . islam in the middle ages. muslim: someone who practices the monotheistic faith of islam (submission

Islam - . global studies 9 mrs. hart and mrs. bernier. roots of islam: region of origin. islam was founded on the arabian

ISLAM - By : george,denis. islam. did you know…. muslims are people who follow islam also a building they worship is

Early Expansion of Islam - . the spread of islam. main idea 1: muslim armies conquered many lands into which islam slowly