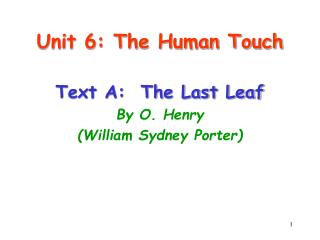 Unit 5: The Integumentary System - . the integumentary system. the skin and its derivatives (hair, nails, glands, ect…)

Unit 6 The Human Touch - . text a the last leaf. what is the human touch? and let’s listen to the song and get some

Unit A:Topic 2 Human Impacts on Ecosystems - . natural resources are the materials and products that are found in

Beowulf Unit - . features of a literary epic. 1. it is a long narrative poem that reflects the values of the society that

THE HUMAN DOORMAT - . when forgiveness and self-preservation collide. importance of forgiveness. the bible is abundantly