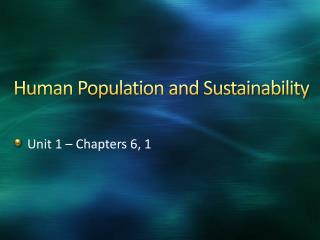 Human Population and Sustainability. Unit 1 – Chapters 6, 1. Essential Questions. How has the population of humans changed over time? How are various countries trying to control their populations? What population issues are facing the United States specifically?

TREN 1F90 Introduction to Sustainability - . http://www.brocku.ca/tren/ courses/tren3p18. these notes available via the

Human Uses of the Environment - . kari dunphy. sustainability in minnesota. minneapolis greenprint a road map for

HUMAN POPULATION DYNAMICS - . see world population video. video. what do you think?. did you know?. 06_12.jpg. how many