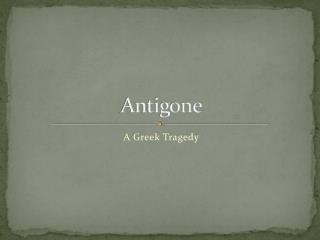 Allusions in Antigone - . the background for act iv &amp; ode iv. tantalos and

Greek Drama and Antigone Review for the Test - . you will be separated into two teams. team eteocles &amp; team

Introduction to Antigone and Greek Tragedy - . general information. classical tragedies were composed within a definite

Jeopardy - . choose a category. you will be given the answer. you must give the correct question. click to begin.

Oedipus Rex and Antigone - . a formal review using literary elements. character analysis : oedipus. at the start of the

ANTIGONE WEBQUEST - . an introduction to greek tragedy. welcome to the antigone webquest!. before beginning your

Antigone - . paean and exodos. 1. the choragos and the chorus pray to a “god of many names.” what are some of these