The “Old” West and the “New” South - PowerPoint PPT Presentation 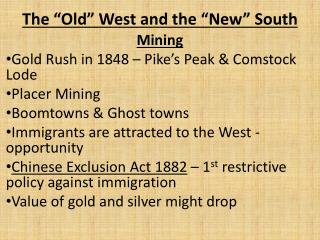 The “Old” West and the “New” South

The “Old” West and the “New” South

The New West - . indians and miners and cowboys and farmers oh my!!!!. westward expansion—exploitation

Unit One, Day One - . objective: swbat identify at least five characteristics from the paleolithic era on a textbook

Laos - . by: jt. photos: internet. laos. laos. is a landlocked country in southeast asia, bordered by burma and china to

The New West - . indians and miners and cowboys and farmers oh my!!!!. westward expansion—exploitation

Geographical position: - Romania is situated in southeastern europe and it borders on ukraine (north and east), the