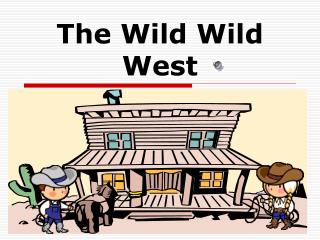 The Wild Wild West. Geography of the West. Towns in Missouri were thought to be the end before the frontier Frontier – unsettled land in western United States The West is considered states beyond the Rocky Mountains like Oregon, California, etc.

The Wild West - 6 m’s . the wild west. manifest destiny. god given destiny to expand from coast to coast. england and

The Wild West - . part ii: farming in the west. objectives: explain the new agricultural methods used by farmers on the

The Wild West - . on your white board, write “the wild west” and circle it. around the circle, write as many words as

The Wild West - . part i: the cattle drive part ii: farming in the west. with your partner, watch the video &amp;

Some Frontier Issues from the Wild, Wild West - . ken klingenstein. topics. activities in the us r&amp;e sector

Some Frontier Issues from the Wild, Wild West - . ken klingenstein. topics. activities in the us r&amp;e sector