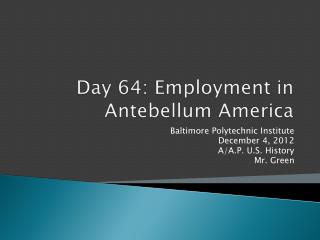 HUMA 100G The Women’s Movement in China: Causes and Effect - . background history of the women’s movement. history of

The Second Great Awakening - . revival of religion. -people’s actions determined their own salvation! belief in the

Back to the Roots - . agritourism in india. nicole häusler, dörte kasüske. learning outcomes. after completing this

iClicker Question - . bobcats or grizzlies? or other? bobcats grizzlies other. thanks to the economic research center,

Forging the National Economy - Quickwrite : how did two of the following contribute to the reemergence of the two-party

Wedges of Separation 1850-1860 - . senator stephen douglas-illinois. “there are eleven hundred coming from platte