Who Are the Allies of Allah? Session 3 - PowerPoint PPT Presentation 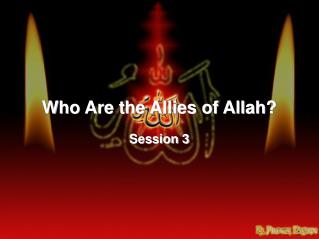 Who Are the Allies of Allah? Session 3

Who Are the Allies of Allah? Session 3. "Anyone in whom are found four things is a pure hypocrite, and if they have some degree of these things, they have that degree of hypocrisy until they change their ways: When they speak they lie, when they promise they break

Who Are the Allies of Allah? Session 3

Byzantine and Islamic Art 476-1453 - . in 324 ad emperor constantine moved the capital of the roman empire to

Tatlong Taong Walang Diyos - . the japanese occupation of the philippines (1941-1945). one of the first acts of the

91st Annual Meeting of the Southwestern Social Science Meeting - “ sacred activism” in the face of colonialism: the

We don’t live alone… Re-read the Inspector’s final speech… - . once you’ve done that, make a list of as many

Participants: Allies: Green Axis: yellow Neutral Grey - . goals?. you should be able to answer the following questions by

Session Title: Familiarisation with schemes. and Gender Sensitisation - . session overview. in this session we will

Allies - . 801. the allies in world war i consisted of great britain, france, italy the allies were pitted against the