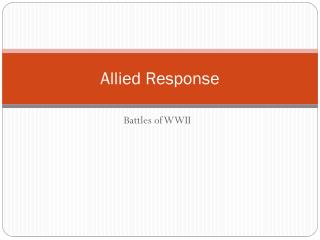 ALLIED WINCHES - . the world’s leading winch for bulldozers over 70 years of experience covers bulldozers from 70-500

Allied Powers - Do now. world war one: casualties. allied powers. central powers. france. before. before. after. after.

Allied Offensive - . the pacific front. i. allied strategy. allied goals in the pacific after guadalcanal (february

Allied Propaganda - . world war ii. the intimidating shadow of a nazi and his whip illustrated the threat of a german

The Allied Victory - . how do the allies defeat the axis powers?. i. d-day: invasion of normandy (european