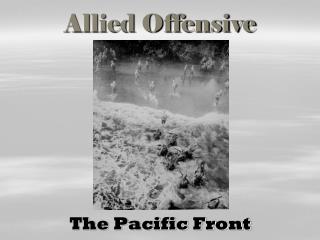 Allied Offensive. The Pacific Front. I. Allied Strategy. Allied goals in the Pacific after Guadalcanal (February 1943): Get close to Japan Then launch massive strategic air attacks Use a submarine blockade Invade Japan if necessary Allied strategy in Pacific to get to Japan Tet Offensive - . january 30 th. a truce was reached for this event. funerals were used as a cover to bring about an

OFFENSIVE PLAYBOOK - . playbook legend formations the te will line up according to the formation side (ex: blue rt).

Offensive Line - . offensive lineman have to work together. switching the right guard to the left tackle from week to

The Tet Offensive - . the turning point of the war jan-april 1968. general westmoreland. us has more than 500,000 troops

The Tet Offensive - . 1968. conflict in vietnam. the vietnam war was a military struggle fought in vietnam from 1959 to