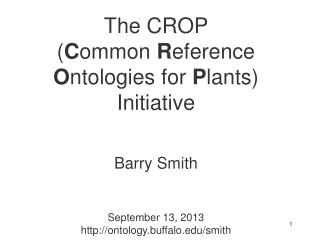 Mental Functioning and the Ontology of Language - . barry smith october 1, 2012 with thanks to janna hastings. basic

Common Sense and Quantum Mechanics - . barry smith http://ontology.buffalo.edu. theory of vagueness. how can -based

Smith Family Reunion - . fun and games. plenty of food. thanks to grandpa smith for doing the grilling. fun and laughter.

The Information Artifact Ontology - . barry smith. presentation tomorrow at 2pm (session 1b). iao-intel an ontology of

Introduction to Nutrition - . chapter 1. objectives. after reading chapter 1, class activities and discussion you will be