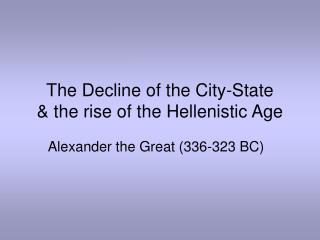 The Decline of the City-State & the rise of the Hellenistic Age. Alexander the Great (336-323 BC). Effects of the Peloponnesian Wars, 431-404 BC. Despite the restoration of democratic government, Athens never returned to its former power… Constant warfare among other states continued… New York - . new york is located on the east coast the 11 th state in america. new york. new york’s name is “the