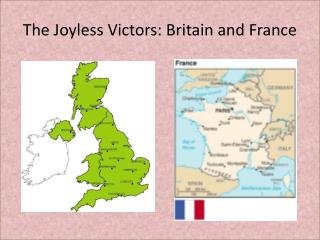 The Joyless Victors: Britain and France

The Joyless Victors: Britain and France. Post-WWI Britain. Economic Confusion The economy was depressed throughout the 1920s. By the end of 1921, two million were unemployed and unemployment was 12%

The Joyless Victors: Britain and France

The Great War - . p.454. facts of world war i. 1.germans were the first to use flamethrowers in wwi. their flamethrowers

Travel - . abroad. oxford english 8b u6 meilong middle school shi jiangang. pavilion france. where is france?. which one

CULTURAL EXPRESSION AND AWARENESS - . lesson2 different aspects of culture. politics and government. t he  union of

CULTURAL EXPRESSION AND AWARENESS - . lesson2 different aspects of culture. politics and government. t he  union of