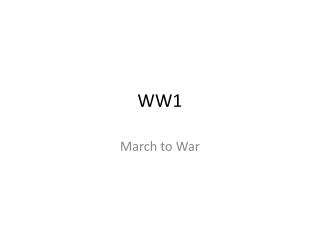 WW1. March to War. Germany and the New Balance of Power. Germany – population, industry, military might had all increased 1900 – Germany was out producing both Britain and France in steel 41 million to 64 million by 1910 ww1 - . by joel. poppies poppies were used to represent the wartime heroes that fell in war. they decided to be

WW1 - . name: jared ramey. who was the war with?. on one side was the triple alliance made up of germany, austria-hungary

ww1 - . by jahzaya and keira. plans were used to throe down bombs. in ww1they did not have much people who lived it was

WW1 - . poppies. today marks 92 years since the first poppy day was held in new zealand in remembrance of fallen soldiers

WW1 - . by ruth. poppies. poppies are special to me because they represent the soldiers that fought in wwi. they help me

WW1 - . russian revolution. russia in ww1. weaknesses: did not have sufficient food, appropriate armaments, or adequate

ww1 - . by o llie. trenches. in world war1 the trenches filled up with rain water so lots of solider got trench foot the

WW1 - Stalemate - . lesson starter describe the schlieffen plan, the german plan for a war on two fronts. today we will

WW1 Weaponry - . this powerpoint is all about the weapons!. ww1 weapons. weapons in world war 1 were old. old semi

WW1 QUIZ - . fill in the missing word from this lincoln pierce book ‘big nate, the boy with the biggest head in the