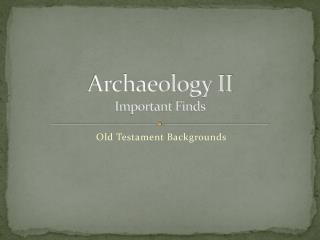 ☺☻☻☺ - . agri-bio linguistics god’s signature on his creation. archaeology *. the study of b e re’shiyt *the

Chapter 1 Lesson 1 Vocab: - . prehistory: the period of time before people began to write. archaeology: the study of

Why Is Marketing Important? - . why is marketing important?. let's start with a definition of marketing for small

Why Is the Mayflower Compact Important? - . the mayflower compact is important because it is an example of representative

Session Three - . teaching beginning reading. how important is reading. why is reading / reading for young people such

ARCHAEOLOGY - . an introduction. what is archaeology?. turn to the person sitting beside you and discuss what you believe

Does Archaeology Verify The Bible? - . dr. heinz lycklama heinz@osta.com www.osta.com/apologetics. overview. what is

Connections: Quarks to the Cosmos - Beyond einstein and the big bang when one tugs at a single thing in nature, he finds