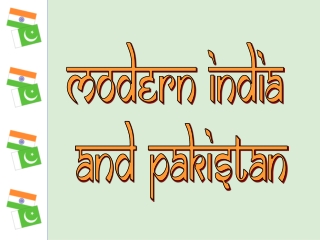 Pakistan and India - Under the scheme of partition provided by the indian independence act of 1947, kashmir ... its

India &amp; Pakistan - . problem: in 1947 when india becomes a free country, it has around 350 million hindus

Ethnic Nationalism: Pakistan and India - . what is nationalism? . anthony smith: ‘nationalism provides perhaps the most

India and Pakistan Since Independence - Pakistan has alternated between elected democracy and military dictatorship ...

INDIA AND PAKISTAN SINCE INDEPENDENCE - . partition. jinnah and pakistan.