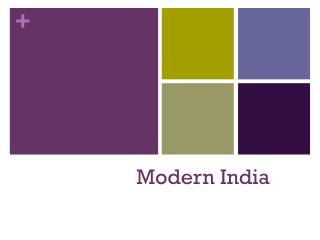 Modern India. British Rule in India: 1600s: The British East India Company . King James I of England sent a personal envoy, Sir Thomas Roe, to the court of the Mogul emperor Jahangir in 1614. Rise of Modern india - . great britain had colonized the country of india during the 1700's. in the late 1880s, indian

Modern agricultural implements in India - Did you know that india ranks second in the world in farm output? production

Modern India for Antriksh Officers Enclave - Facilities of antriksh officers enclave include everything, from a clubhouse

Changes in Modern China and India - . objectives. analyze how china has reformed its economy but limited freedom.