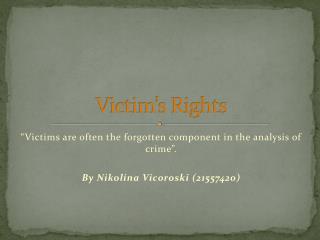 Victim’s Rights. “Victims are often the forgotten component in the analysis of crime”. By Nikolina Vicoroski (21557420). DEFINITIONS. United Nations Declaration of Basic Principles of Justice for Victims of Crime and Abuse of Power (1985) Victims Rights Act (1996). Chapter 3 Victim Assessment - . learning objectives. when you have mastered the material in this chapter, you will be