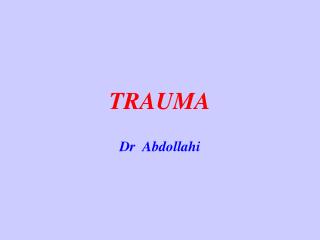 TRAUMA. Dr Abdollahi. Trauma and associated life-threatening injuries account for 10% to 15% of all patients hospitalized. Rapid transport of a trauma victim to a trauma center rather than to the nearest hospital has resulted in improved outcome for the victim. Trauma &amp; SECONDARY Trauma - . welcome. offered to you today as a result of a pilot partnership project between

TRAUMA - . firas madbak,md. in a stable patient with pelvic, abdominal and retroperitoneal injuries, the most sensitive

Trauma - . originally either a direct physical blow to the body or the resulting damage a surgeon’s concept.

Trauma - . spring 2012 final. some trauma stats. most common cause of death for those 1-44 years of age medical

Trauma - . comprehensive review. time vs. survival. relationship of time to survival the “golden hour” importance of