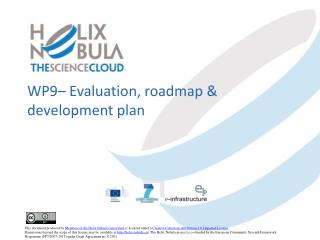 WP9– Evaluation, roadmap & development plan. WP Objectives. To provide a well-informed exit strategy from the project in terms of understanding what has been achieved and what remains to be done. Specific goals: Understand the cost-comparison between existing and cloud-based systems.

ASSESSMENT AND EVALUATION TOOLS AND TECHNIQUES FOR CCE - . continuous comprehensive evaluation ?. continuous and

ITCS 6010 - . vui evaluation. summative evaluation. evaluation of the interface after it has been developed. typically

What is Evaluation and Why we do it? - . mariana garrettson, mph shrikant i. bangdiwala, phd unc - injury prevention

Evaluation of Teaching at Stockton - . heather mcgovern director of the institute for faculty development august 2010.