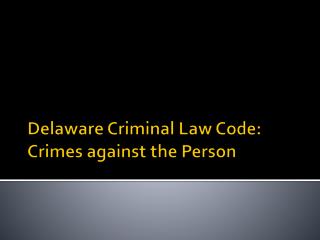 Delaware Criminal Law Code: Crimes against the Person. Murder. Killing with Malice: an intent to kill or cause serious harm Degrees of Murder identify killer’s state of mind or circumstances during crime. 1 st Degree and Felony Murder. Delaware Wing-T - . coach thurman. why the wing-t?. in an ever growing trend, more and more coaches delve into the