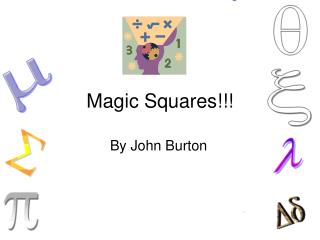 Magic Squares!!!. By John Burton. What Are Magic Squares?. A Magic Square is a grid (or matrix) containing numbers from 1 to n (where n is any number), and where every row, column and diagonal adds to the same number The most basic example is the 1 x 1 square, shown below. Get TWO sheets of paper and fold in thirds to make nine squares - . get a book. chapter 8 vocabulary. long drive open

HISTORY OF PUPPETS - . tricks and magic. the history of puppetry is closely related to feats of magic and conjuring. they

Navigate “ On the Magic Carpet Ride ” The Interactive Process Under A.D.A. and F.E.H.A. - Navigate “ on the magic

Something Involving Tentacles - . exploring lovecraft, chaos magic, and the alignments of the stars. io cthulhu ftaghn!.

6-5 Rhombi and Squares - . you determined whether quadrilaterals were parallelograms and/or rectangles. recognize and